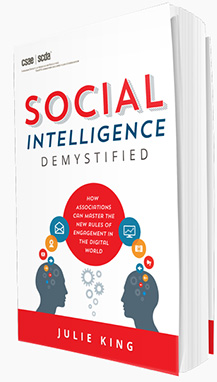 We are thrilled to announce that the Canadian Society of Association Executives has published Social Intelligence Demystified, a book authored by Julie King, Biz-Zone's President & CEO.

Julie began work on the book in 2012 after running several workshops for association executives that pinpointed a critical misunderstanding.

"People were frustrated and while association leaders clearly understood that they could not ignore things like social media, they wanted to jump ahead to tactics without understanding the big picture," says King.

"My decision to publish a book was not made lightly, especially for a topic that was changing so quickly. Yet having used social media to build substantial online audiences, I realized that it was important for leaders to have a way to understand the strategic overview before getting into tactics."

Social Intelligence Demystified is a book about context marketing for associations. It touches on search optimization, social media, content marketing and also the neuroscience elements underlying how people make decisions.

Associations are at a unique position: They can dominate in the new landscape, or lose relevance to businesses willing to invest the time and resources needed to lead communities online.

Laid out in a sequence that is easy to follow, Social Intelligence Demystified teaches readers about the new rules and then provides toolkits and practical advice that will help them master those rules within their own associations.

Copies of Social Intelligence Demystified can be purchased through the Canadian Society of Association Executives.

So Much, So Simple